This last week I had the opportunity to shoot at the USCSA Western Regional Championships at Bogus Basin.  Two hundred twenty of the Northwests best collegiate alpine ski racers and freestyle athletes were converging for a three-day shootout to see which teams and individuals would be heading to the Nationals in Sun Valley in March.
Snow on Wednesday and overnight meant that Thursday morning we awoke to the first significant snow accumulation in nearly a month.  No matter, JJ McCloud and the crew at Bogus had the racing surface prepared - we just had to move a few inches of snow off the firm base underneath and it was showtime!
Images, equipment and technique after the jump... 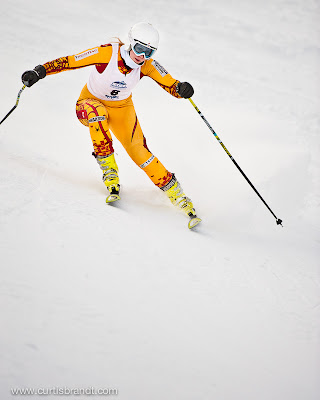 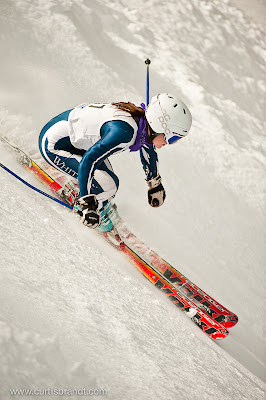 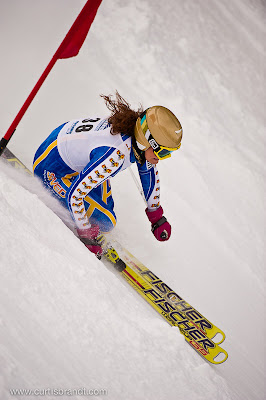 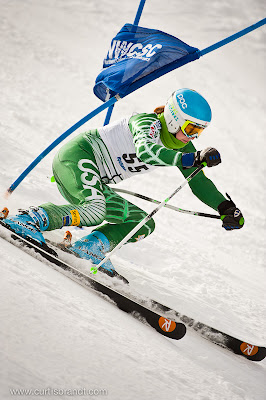 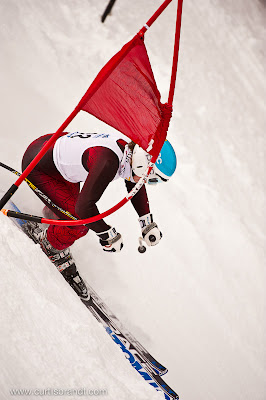 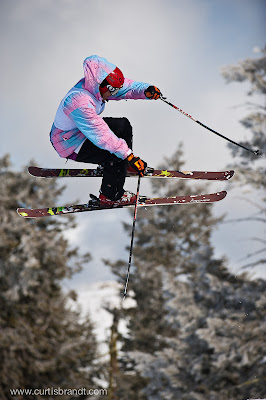 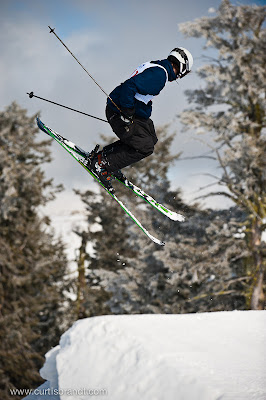 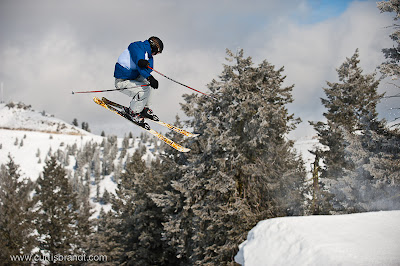 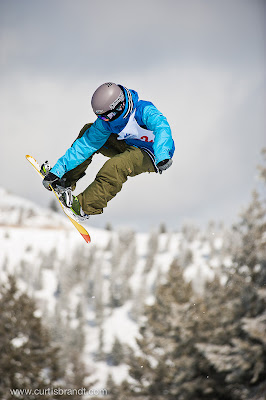 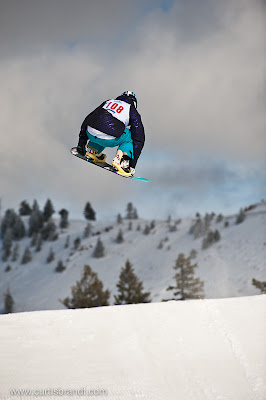 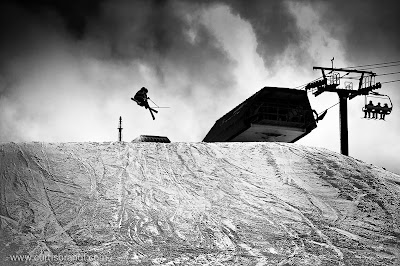 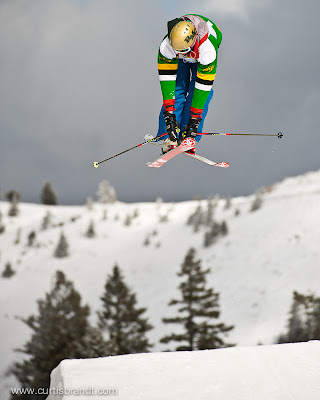 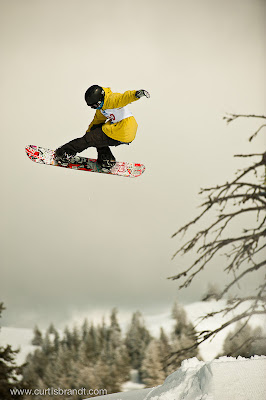 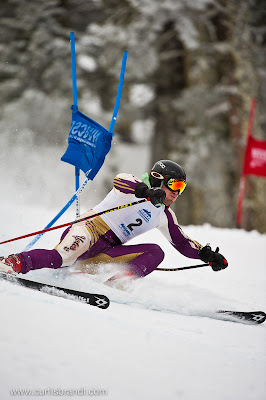 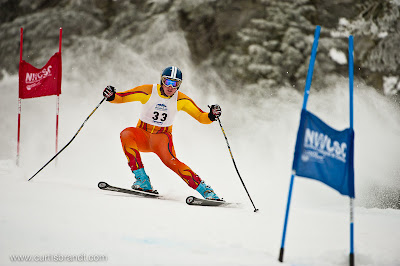 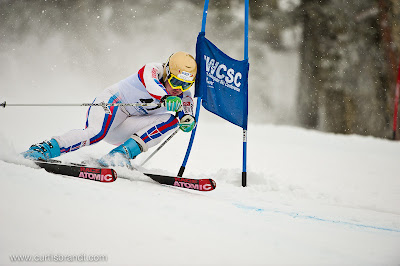 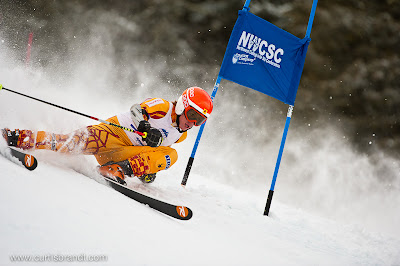 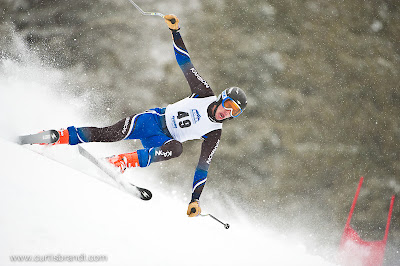 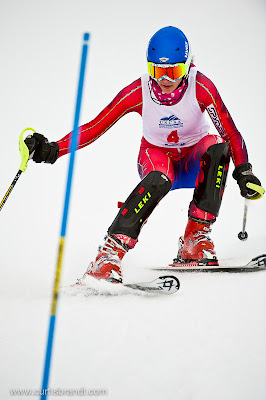 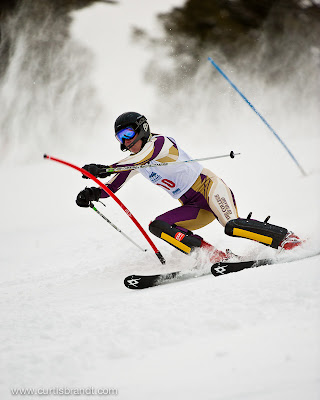 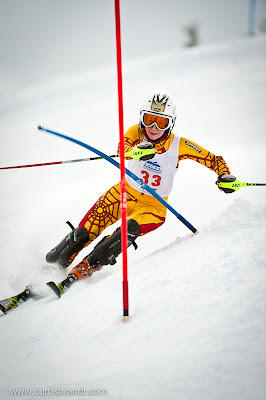 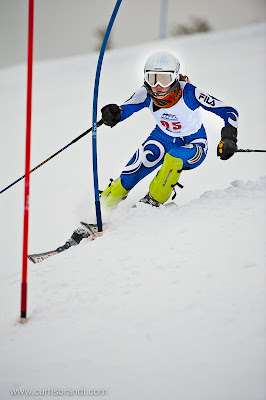 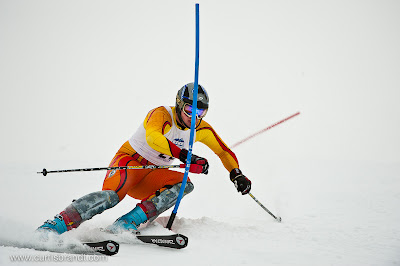 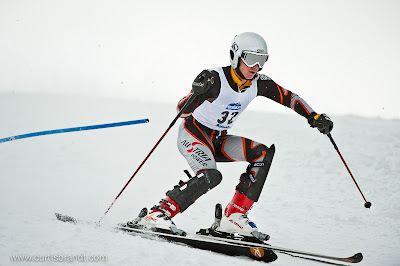 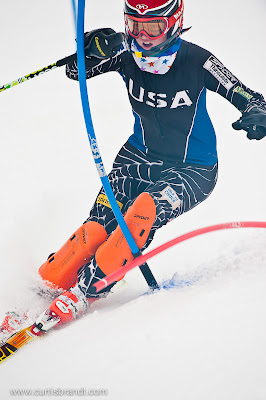 It was difficult, and somewhat imprudent, to move around on the course once the competition began, so I scouted the hill carefully for safe spots that would provide options for at least a couple of different compositions per run.  Add in constantly changing weather, unpredictable action, and working on steep, slippery slopes and you’ve got a recipe for a challenge and a lot of fun, guaranteed!
Equipment:
In typical form for sports coverage, I took two camera bodies, a long lens, a medium telephoto, something wide, and a speedlight.  The main camera was my trusty Nikon D700.  I needed a camera/lens combination with a fast frame rate (preferably 8 fps or above), fast and accurate autofocus, and good weather sealing.  As a legion of D700 fans know, it’s hard to beat that camera’s combination of qualities for anywhere near the price.  Having used almost all of the Nikon fast super-teles at one point or another, I guessed that the 200-400 f4 would provide a great combination of good reach, (relatively) light weight, manageable size to carry in a backpack I could still function on the hill with, and focal length flexibility as a bonus.  Additional gear included an 80-200 f2.8 and 16-35 f4 for any up-close options that may have materialized.  The backup body was a D300s.  (Thanks Lens Pro To Go for the 200-400 f4 and the D300s!)
Technique:
Photographing ski racing presents many of the challenges inherent in fast action sports as well as some fairly daunting environmental considerations.  My goal was to draw attention to the athletes and convey the conditions they faced, to bring together elements of dynamic composition with peak of action.  Given variability in lighting, changing weather conditions, variations in athlete speed and line choice, and a desire to have at least one great image of each competitor,  I needed to choose settings which maximized the chance for success.  Most of the racing images were at the long end of the 200-400, to allow room for me to be safely out of the way as well as to take advantage of narrow depth of focus in service of subject isolation.  While elevated speeds make the longer lens the go-to for racing, an 80-200 is great for freestyle.  Another crucial element was fast shutter speed.  Artistically, I’d like to experiment more with long shutter speeds and make some images with really long blurs.  At the extremes of long shutter speeds with fast action, however, really great images are a low-percentage deal.  So in the interest of nailing a sharp image of each competitor I knew I needed to be at or above about 1/1250th.  Most of the time the settings hovered around f4.5 and 1/1600th, selected manually.  When clouds obscured the sun, I engaged auto-ISO to keep those parameters set while bumping ISO  a bit to maintain reasonable exposure.  Overall, the D700 meter does an outstanding job in the snow, much better than other cameras I’ve owned.  In bright sunlight, there’s a tendency to over-expose about 1/3 to 2/3 of a stop, blowing some highlights.  Certain compositions allow for, even require, blown highlights.  In flat light in the snow, the matrix meter on the D700, like most cameras, may need positive exposure compensation in the range or +1 EV or even more.  It’s best to keep an eye on the conditions and ride the settings a bit to maintain a good overall exposure. After all is said and done, there’s a lot to be said for shooting RAW, relying on a camera that has amazing exposure latitude as well as super-clean high ISO performance.
The 200-400 is hand-holdable for short periods, but not for all day (at least for me).  Crucial support elements include a monopod with a sturdy and functional head.  Ball heads are wonky on a monopod, but Really Right Stuff makes the perfect long-lens/monopod head.  As usual, it worked to perfection.  Sometime, however, I need to replace my ancient Bogen monopod which is a fine piece of equipment but totally out of its design parameters sitting under a combo like a pro DSLR and super-tele.  Hard to beat carbon fiber for light weight and all-weather functionality.  (I think my next monopod will be this one.  You can’t go wrong with Gitzo, but you have to love RRS for their photographer-centric ethos and American Made quality.)
Big thanks are due to: JJ McCloud at Bogus Basin, the organizer Coach Ron Bonneau from College of Idaho, Lens Pro To Go, and Hot Gear for helping start each day with warm toes.
Leave a comment with any questions.  I’d love to hear what you think of the images.
Posted by Unknown at 2:52 PM